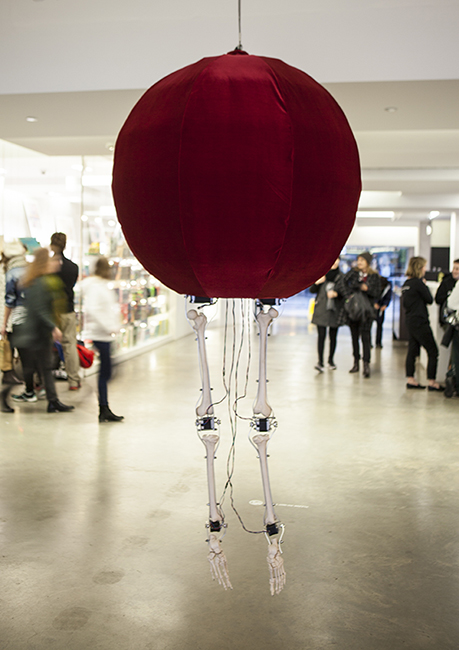 Moonwalker (2016) is a robotic sculpture that reflects on moonwalking and the idea of being in two places at once. Suspended from the ceiling, its movements are designed to recall Michael Jackson’s famous Moonwalk dance move from the 1980s, as well as “the limited, zero gravitational movements experienced by astronauts Neil Armstrong and Buzz Aldrin during their 2-minute jaunt across the moon’s surface”. For the artist, the idea that Michael Jackson could ‘walk on the moon’ while standing on the earth is also related to the compressions of time and space we experience when using mobile technologies.

Marynowsky describes the robot’s bulbous head as a visual allusion to American Futurist Ray Kurzweil’s prediction that by 2030 “human brains will be able to connect to the cloud, allowing us to send emails and photos directly to the brain and to back up our thoughts and memories”.