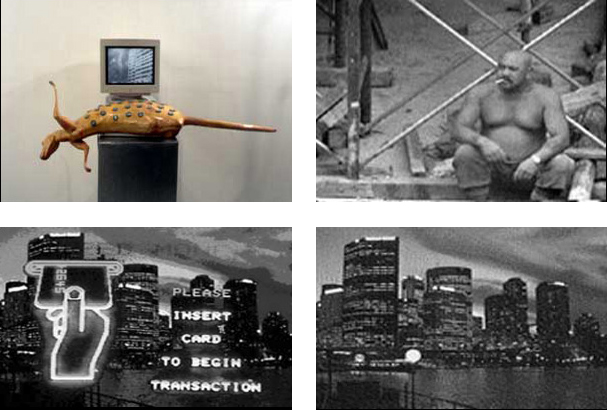 There goes the neighborhood mixes computer games and urban spaces with a dead kangaroo. Sydney/Australia continuously attempts to erase its past through promise of the future. Whether its clearing land for cows or housing estates, or the demolition of historic buildings for more and more apartment blocks, roads, uranium etc, ecology and ancient history simply do not matter if short-term profit or global economy are involved.

The work is an attempt to gain power over these life draining forces, a defence against the too-muchness of the world, a tool in the important undertaking of making (non) sense of the world. Its encoded messages flicker ceaselessly along communication channels. Among monstrous machines or designated nature zones.

Messages are scanned within built surveillance mechanisms revealing hidden agendas, that Aussie feeling of criminality. An attempt to reclaim public space, a sense of the carnival, a connection to the wondrous land and its strange animals. To restore a sense of equilibrium to a society sickened by the vertiginous whirl of TV culture.