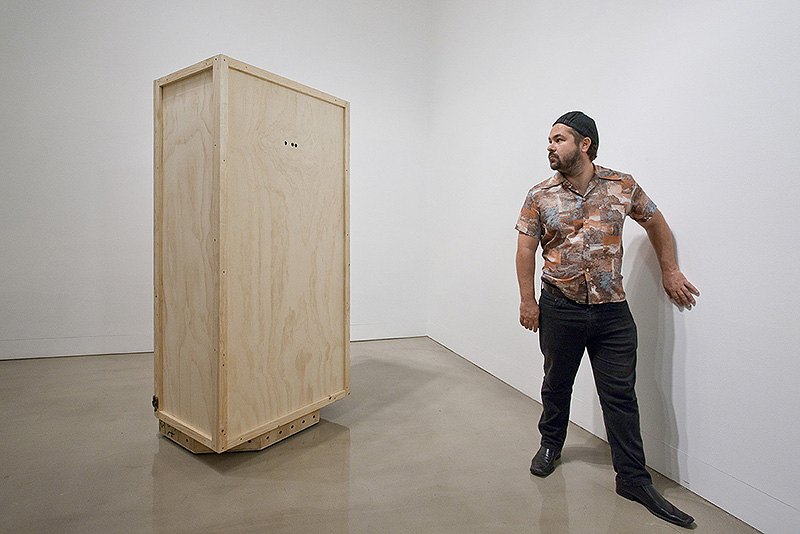 The Acconci Robot is an interactive robot that follows you unawares. Appearing as a shipping crate of minimal design, the robot is mute and motionless as a viewer approaches. But when the audience member turns away, and starts to leave, the robot begins to follow. If the audience member turns to look back at the robot, it stops in its tracks. In this cheeky and playful work, the artist inverts our expectations of the direct engagement and reciprocal exchange typical of interactivity, by creating a work that only responds when the audience is most disengaged from it.

The work draws inspiration from a 1969 performance work, Following Piece by Vito Acconci, in which the artist followed unsuspecting individuals in an urban setting as far as he could. Acconci's investigations of the body in public space are re-contextualised by Marynowsky in a gallery context, re-examining interaction and audience participation by drawing parallels between sixties conceptual performance art and art in the age of interactivity.

The Acconci Robot, was commissioned by Experimenta for their 5th International Biennale of Media Art. The work has been exhibited at the Royal Melbourne Institute of Technology gallery, 2012, the International Symposium of Electronic Art, ISEA2013, Powerhouse Museum, 2013 and Thingworld: The International Triennial of New Media Art, National Art Museum of China, 2014.