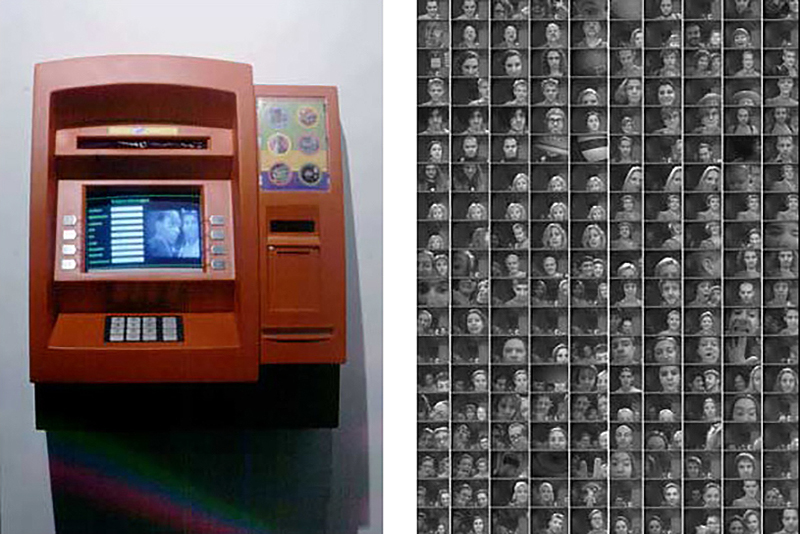 I know you. Exhibited at Artspace Sydney in the group show "Surveillance", 1998. An Automatic Teller Machine facade (supplied by NCR National Cash Registers) a small surveillance camera, a computer and Director software programmed by Adam Hinshaw.

The ATM was mounted to the wall with a computer behind the wall connected to the facades buttons. The software is designed to capture a photograph of the person who has pressed the teller's right hand buttons and display it on screen next to a list of false personal information e.g. name, D.O.B, criminal record etc. Over time the computer accumulates pictures + text files which are stored and available for viewing by pressing the left hand buttons of the AMT. The information is randomly picked from lists that are half made up and half real.

The real information came from Racheal Baker's (irrational.org) databases of personal data accumulated from her false corporate web sites. Specifically her site for 'TM Club card - "Earn Points When You Surf" where Tesco's (Supermarket) site was re-appropriated revealing secretive marketing strategies. "This work questions our every day acceptance of the information we give to corporations of our own free will - often on a daily basis - in a supermarket; in a garage; but more importantly it magnifies the crucial area of who owns the information on individuals and what is actually done with that information." http://www.irational.org/tm/clubcard/front.html

The work became a photo data collector. The most interesting thing for me became peoples reactions to the work which is shown in the images. Hovering over the technology like a baby. Some enjoyed having to press buttons within the corporate facade taking several pictures of themselves or looking at others captured. Others wondered/understood why their image was there but their name was wrong, why they had a criminal record of sex with a cigar or Waco cult member. The level of interactivity was limited to specific functions. Users were not able to enter data nor print their image. 514 images were taken over 3 weeks.