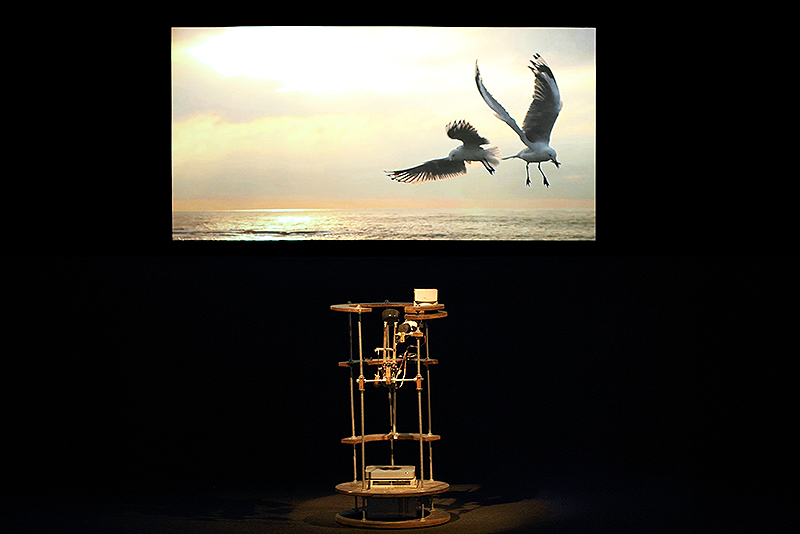 Fish and Chips, 2013, commissioned by Campbelltown Art Space, for ISEA2013.

Fish and Chips by Wade Marynowsky and Michael Candy. The duo developed robotic works that interact within the environment. The project exists within two realms, Land and Sea. An underwater robot interacts with fish and a land-based robot interacts with seagulls. Australian beach culture is played upon by the artists and their multiple robots, designed to interact with nature through a series of robotic interventions.

In a humorous wink towards Eadweard Muybridge 'Chips' is a study of seagulls in flight, and in fight for hot chips. The work turns a famous Australian past time (which can quickly become a nuisance), into poetry in motion by freezing moments in time. The Chipper is a modified and automated version of a Lenonardo Da Vinci designed catapult. Chips are loaded into the holding tray, which drops a few chips at a time into the slide, the chips travel down the side to the cup, which hurls the chips into the air and into the mouth of competing seagulls.

The Rock Clapper attracts fish by banging to rocks together in attempt to lure the mysterious Blue Gropper. The Rock Clapper is also a modified and automated version of a Da Vinci designed cam. Its main drive is a re-purposed windscreen wiper motor sourced from various car wrecking yards.